All bazaars (markets) in Georgia are fun for me to go to. I love the controlled chaos. The makeshift tables piled high with everything from produce to light bulbs. The sounds of bartering and commerce. The smells. The pickled everything.

The bazaar in Zugdidi, where we were a couple of weeks ago, was even more fun because of the preponderance of my favorite Georgian condiment: adjika.

This spicy, salty and savory treat — a mix of dried spices, garlic, salt and peppers — can be made dry, or with tomatoes as a sauce, or with tomato paste as, well, a paste.

It is said to come from Samegrelo, where Zugdidi is the largest city. In Samegrelo, the native Megrelians have their own language (linguistically related to Georgian, but not so much so that I could make out any words), their own special dishes, and a fondness for all things spicy (tskhare, ცხარე) — something not usually true in other parts of the country.

So it should have come as no surprise that at the Zugdidi bazaar, adjika was on display. Not just the red stuff that we all know and love (don’t we?), but lots of variations, some of which I’d never seen before, including green adjika with sour plums and with mint.

We also saw an adjika “factory,” where they were making huge batches of red adjika and green adjika (with fresh cilantro and dill) in meat grinders. 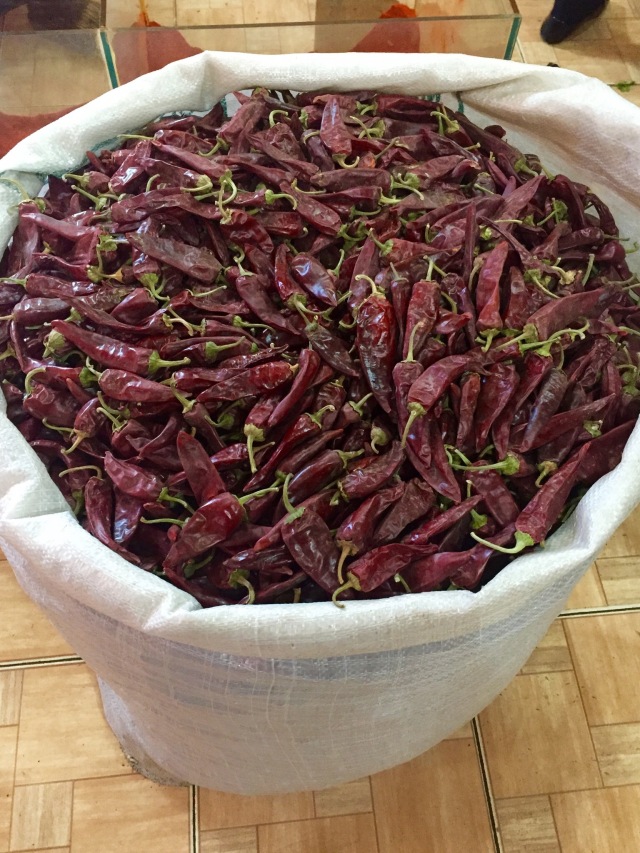 If you don’t know much about adjika yet, I think you will — eventually. Of course we sell the real deal (dry version), but otherwise it’s hard to find in the US. And the Russian versions seen in bottles at Eastern European grocery stores just aren’t the same, in my opinion.

Perhaps it’s time to make some room on the hot sauce shelf for something truly unique and different, alongside the Sriracha, Tabasco, Frank’s and 900 varieties of habanero sauce.

We're Sean and McKinze, returned Peace Corps volunteers and co-owners of Kargi Gogo, a small business dedicated to bringing the flavors of the country of Georgia to the United States. Join us as we travel throughout Georgia this spring, documenting our journey into the heart of this country's incredible food and wine culture.

There was an error retrieving images from Instagram. An attempt will be remade in a few minutes.